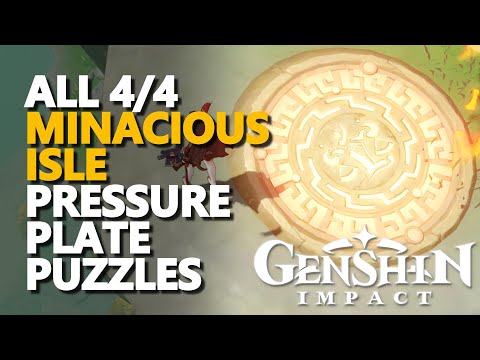 The Golden Apple Archipelago returned to the Summertime Odyssey from Genshin Impact, which takes place from from July 15, 2022 to August 24, 2022 . During this period, you can get a lot of limited chests of chests, solving puzzles in the summer islands.

In the real version on the minacious isle you will find two pressure plates before the constellation-a puzzle that opens only after the completion of the quest segment The Ancient Azure Stars. Then you can use the place in water function to switch between the last and real versions of the island. As soon as you configure everything, go to the area circled in the image below to find a puzzle.

You can create wind streams using the Anemo monument to make it easier to get to the top of the mountain.

Having headed to this area, you will find two pressure plates, a locked ordinary chest and a constellation in the sky. Use the constellation as a reference image to solve this puzzle. The position of the stars parallel to the position of clamping plates.

Suppose that the constellation in front of you step on the pressure plates in this exact order . Do no use geo.

Each time you step on the right pressure plate, the corresponding star in the constellation will be light up , indicating that you are on the right track. If you made a mistake or got lost in the middle of the puzzle, you can re-enter the system to lose your progress. Having stepped on the right plates, the common chest will open for you to rob.